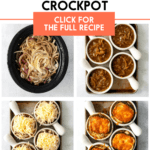 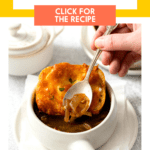 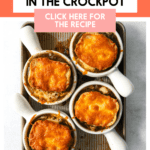 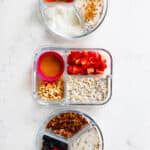 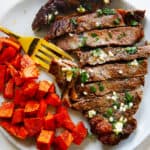 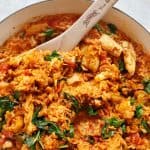 One Pan Indian Chicken and Rice 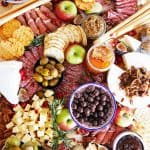 How To Make a Charcuterie Board (& Bacon Onion Jam… 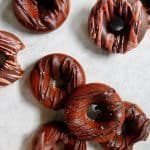 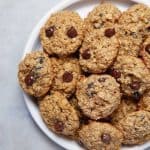 This Crockpot French Onion Soup is an easy and delicious comfort food meal option. It can be served as a light soup or topped with bread and cheese for a heartier, more traditional option! Either way is delicious!

There is nothing quite like sitting down with a cozy bowl of warm French onion soup. And this Crockpot French Onion Soup is the perfect recipe for doing just that! It’s a rich flavorful soup that can be served as-is or topped with toasted bread and gooey, golden cheeses. I mean, what sounds cozier than that?

The other perk? It’s so easy to whip up. Just throw a few basic ingredients in the crockpot and let it work its magic. This recipe makes a ton and, while slow to cook, takes very little time to prepare. Just 15 minutes of hands-on time needed.

What is the Difference Between Onion Soup and French Onion Soup?

While the two are similar, there are a few subtle differences.

First, French onion soup tends to use a combination of yellow and red onions to create a specific flavor profile. English onion soup uses an even wider variety of onions including shallots and leeks.

Second, the broth. French onion soup is always made with beef stock. English onion soup, on the other hand, can be made with any type of broth.

This really is the best French onion soup. This hearty recipe takes a quick 15 minutes to prep and then it’s hands off cooking after that!

Which Onions Are Best for French Onion Soup?

The two together creates a deliciously nuanced and flavorful French onion soup!

Can You Put Raw Onions in the Slow Cooker?

For the crockpot version, we’re adding them into the crockpot raw, but they’re cooking on their own with just the garlic, sugar, butter, oil, and vinegar for 6 hours. This helps really bring out thir sweetness and flavor. Once they’re well cooked, you’ll add in the remaining soup ingredients.

How Do You Deepen the Flavor of French Onion Soup?

This French onion soup recipe is plenty deep, rich, and flavorful on its own. The addition of the balsamic vinegar, fish sauce, and seasonings gives it plenty of flavor depth.

However, some people like to add a splash of red wine or even some Worcestershire sauce to add in another layer of flavor. Feel free to do that if you want!

Good news! While this French onion soup looks and tastes like a total comfort food, it actually is a healthy meal. Onio

Good news! Sure it’s a comfort food, but French Onion Soup is actually a healthy meal option. Onions are high in antioxidants and loaded with nutrients. What could be better than guilt free comfort food?

French Onion Soup is a delicious meal all by itself, but it can be fun to round it out with a couple of sides. Here are a few favorites:

I recommend storing any leftovers without the bread and cheese, so bake only as many bowls as you’ll serve.

The leftover soup will last in an airtight container in the fridge for 3-4 days or in the freezer for up to 3 months.

To reheat, warm on low on the stove until heated through, then portion into bowls, top with bread and cheese, and bake as directed.

This Crockpot French Onion Soup is a delicious and comforting. Serve as a light soup or top with bread and cheese for a heartier option!

To make in the Instant Pot:

Press the saute function on the Instant Pot.  When hot place butter and oil in the pot along with the onions. Cook for 5 minutes, stirring once. Add in coconut sugar, garlic, balsamic vinegar, salt and pepper, thyme and bay leaves and cook on high pressure for 20 minutes. Once finished use the quick release function

Press cancel and remove the lid. If there is a lot of liquid in the bottom of the pot, press saute and cook until it has almost evaporated and the onions are a nice brown color and very jammy.

Add the arrowroot and stir until it has disappeared. Add in 4 cups of beef broth (this is different than the directions for the slow cooker) and fish sauce and close the lid and set to sealing. Finish cooking on manual high pressure, for 5 minutes. Use the quick release function. Season to taste. If topping the soup with bread and cheese follow the directions up above from step 5. 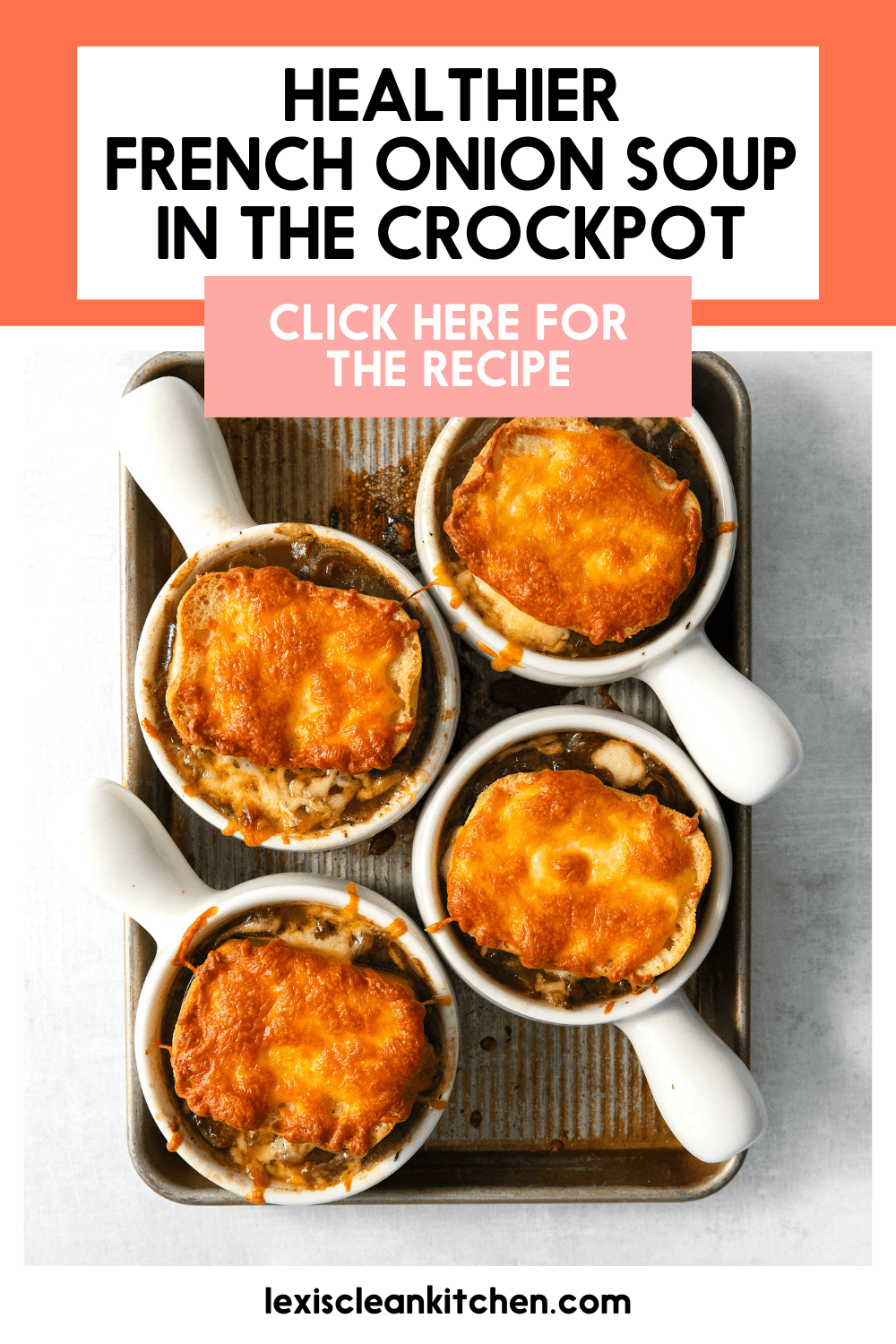 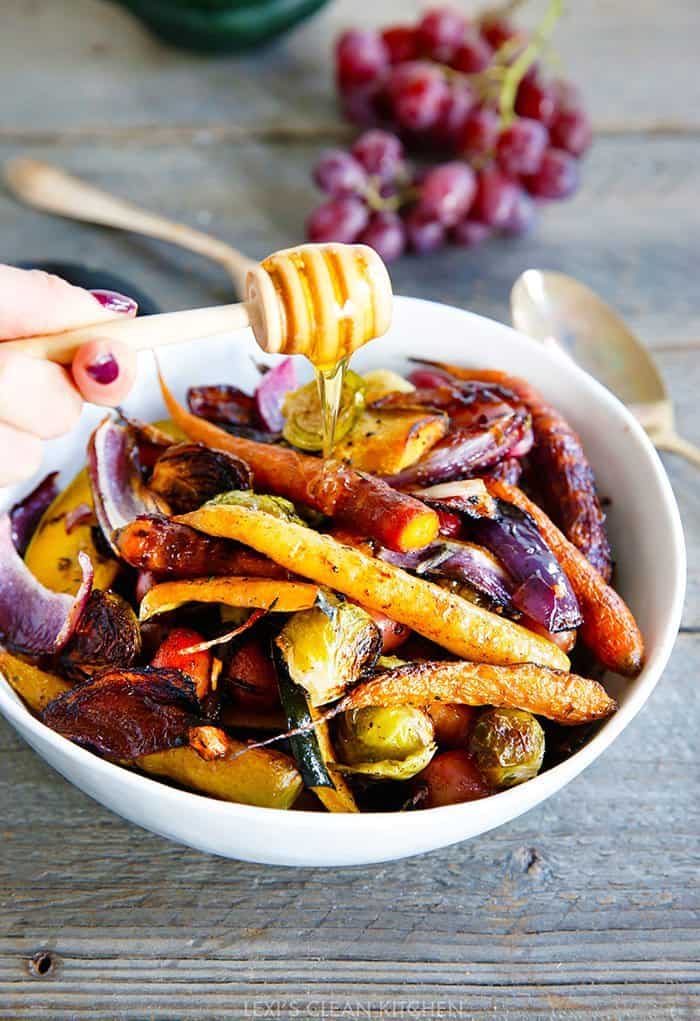 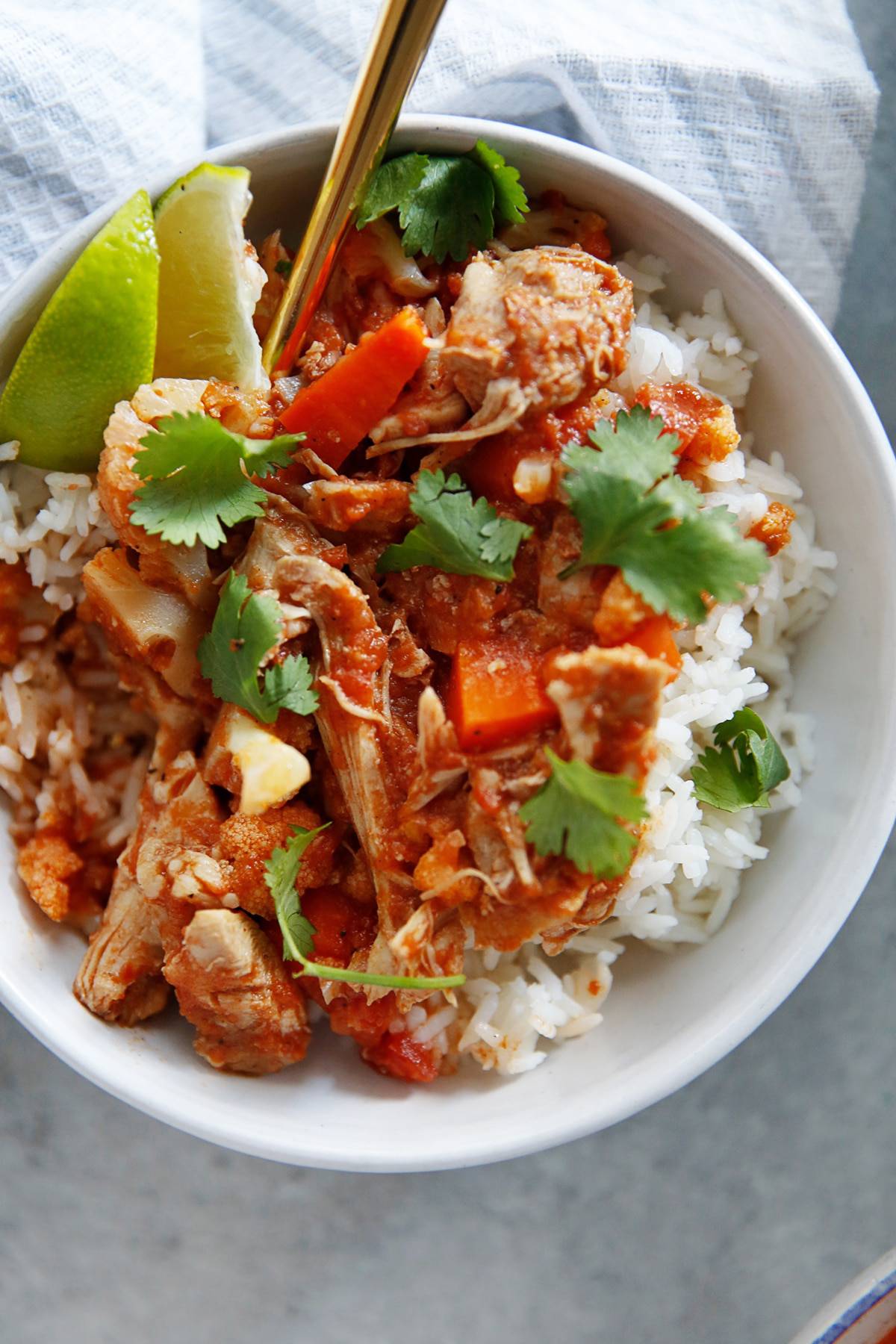 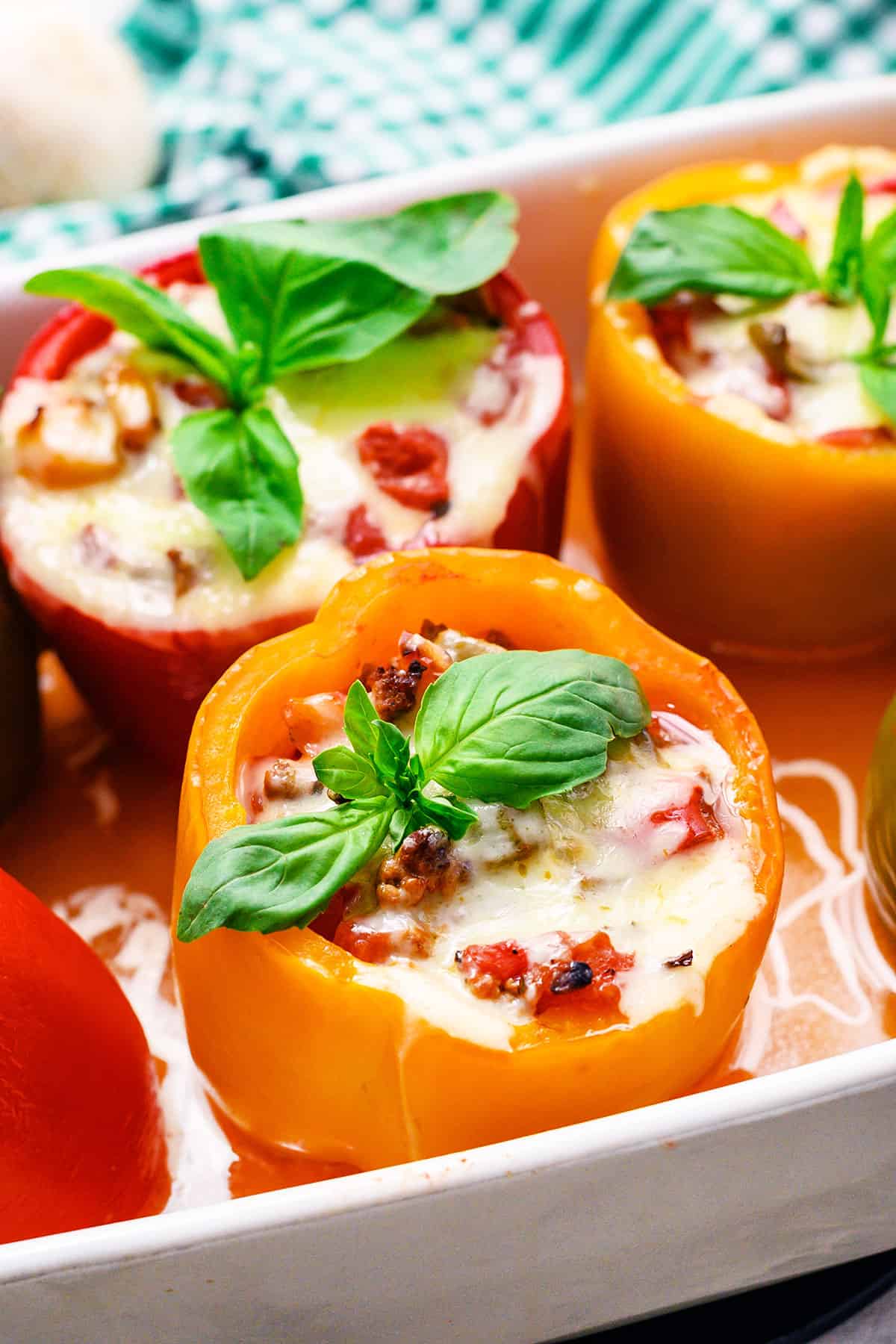 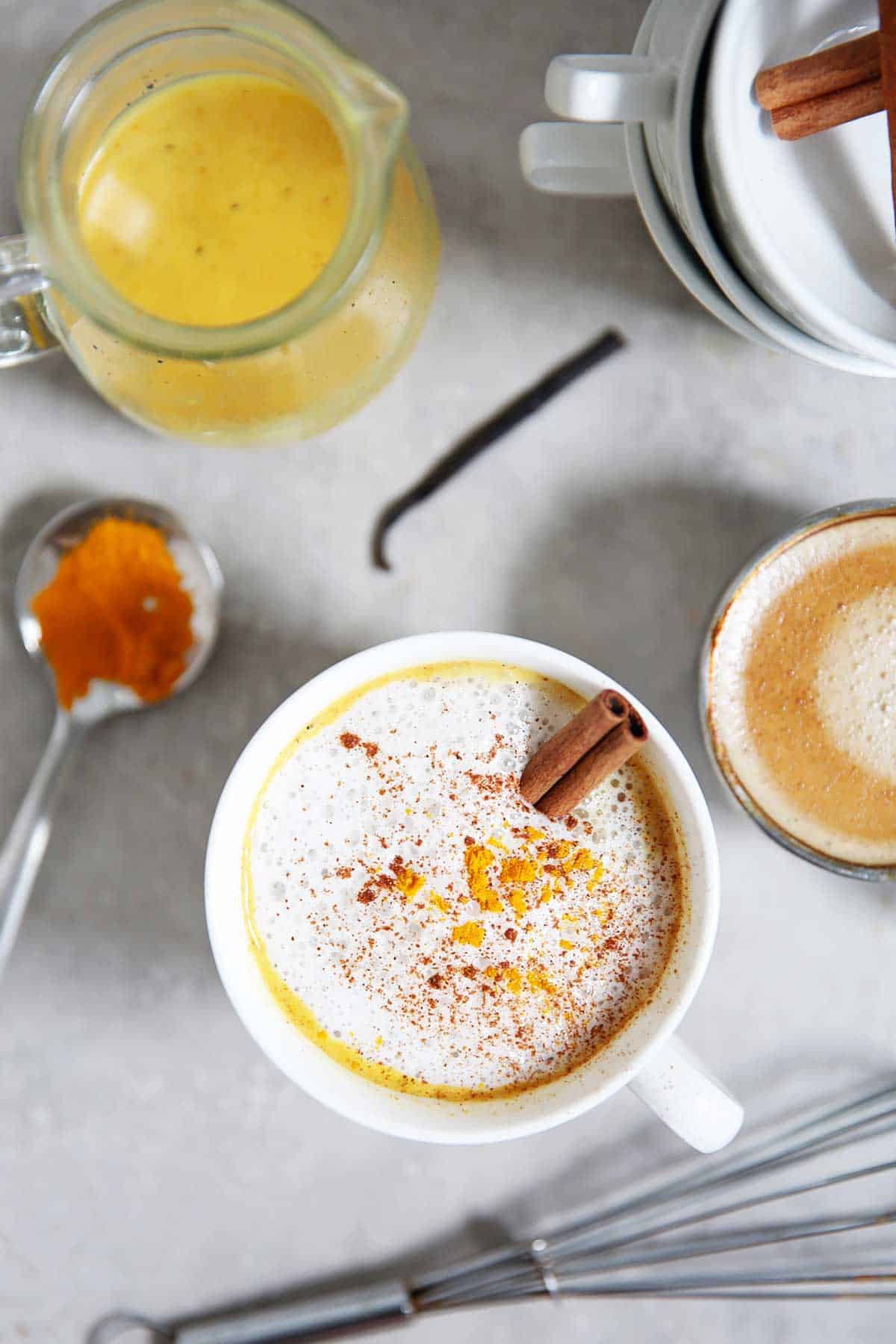